Which London Underground Station Has The Most CCTV Cameras?

Which London Underground Station Has The Most CCTV Cameras?

CCTV cameras are a common feature of modern-day society in London, from airports and shops to car parks and busy streets, monitoring people’s movements in the fight against crime.

One such area where security cameras are in abundance is throughout the sprawling London Underground network, where they are positioned on platforms, in corridors, across ticket offices and entrances, as well as inside the trains themselves.

There is a total of 15,516 CCTV Cameras in the London Underground 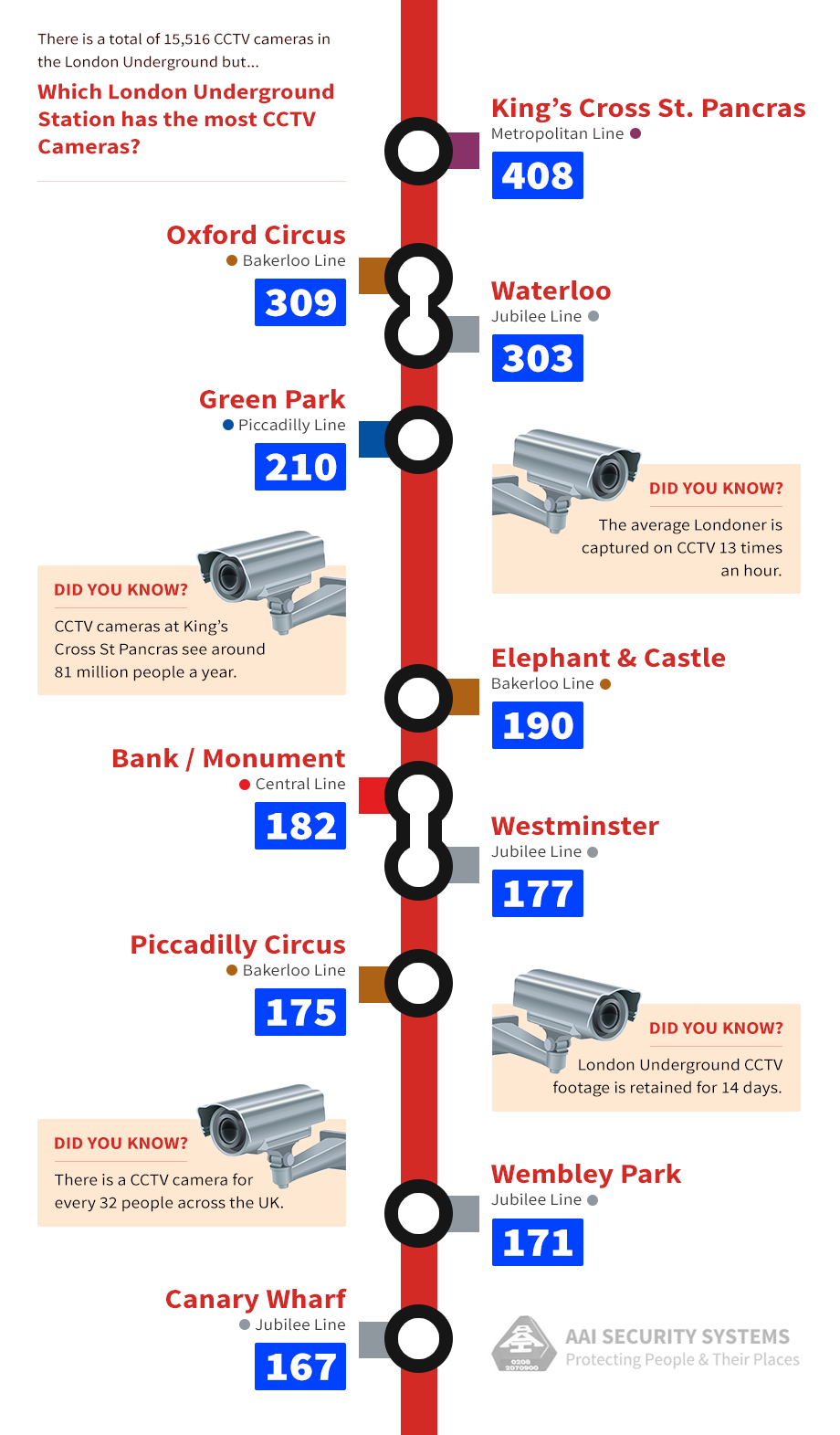 An article from The Guardian from 2011 claimed that there is a CCTV camera for every 32 people across the UK, and that ratio is surely even higher for visitors to London’s underground maze. Certain areas of the network are more heavily monitored than others, for obvious reasons (larger footfall and pedestrian traffic, crime hotspots, tourist areas etc.), with a total of 15,516 cameras making up the Underground’s security reach. While many share concerns regarding the proliferation of CCTV cameras across the capital and the UK as a whole, Transport for London (TFL) are keen to stress that the images they capture across the Underground network are for the safety of their passengers and to aid in the prevention of crime. So where are you most likely to turn up on a monitor when travelling underneath the streets of the capital?

Top ten most CCTV-saturated stations on the network

The appearance of some of the stations on this list would come as no surprise to many. King’s Cross St. Pancras leads the list, with its colossal size, multiple entrances and international and national rail transport hub, seeing around 81 million people pass through its doors on an annual basis. With such concentrated foot traffic, 408 cameras have been situated around the station, with hundreds more located in the two rail terminals above. Similarly, Oxford Circus – a key gateway to one of Europe’s busiest shopping areas around Bond Street, Regent Street and Oxford Street – sees similar numbers of people pass through its central hub every year, while Waterloo tube station sits below the enormously busy rail terminal of the same name, situated close to South Bank attractions like the London Eye and Westminster.

Speaking of the City of Westminster, this area contains four of the stations on the list, including Green Park (close to Buckingham Palace), Piccadilly Circus, the aforementioned Oxford Circus and the Westminster stop itself. With popular tourist highlights such as the houses of parliament and Big Ben nearby, it’s no surprise that these stations are kept an eye on so closely, with 871 cameras in total watching four stations. Wembley Park sits in the shadow of the world-famous Wembley Stadium, and its 171 cameras help to protect the thousands of people regularly flocking to the sporting or musical events held by the venue. At the other end of the Jubilee line sits the iconic Canary Wharf in the centre of London’s financial district, and it’s the tube station here that closes out this list with 167 units.